Using teaching aids to learn how to erect a flag pole assists with back ground visual knowledge. We use various teaching aids often when showing the Guides how to erect a flag pole. Like all things the picture might be worth a thousand words but to actually get the flag flying there is more than just hastly shoving up a pole with a few roles and rocks. It's having the background information and lots of practice.

Firstly there are the knots that need practising. Then the measurements that ensure the poles manageability are worked out. From the ground end to 1/3 of the way up is the focus point for tying the clove hitch. Leaving 2/3rds the height of the pole above this clove hitch. The clove hitch area is important as the ropes from one peg to the other run straight out (at a 180 deg ) either side to the pegs are then tied off with rolling hitches. The ropes to the peg are called guy ropes. The two guy ropes used for the four pegs cross over at the clove hitch point.

The Halyard rope, which hoists the flag into position, runs through this Grommet. As a guess the halyard should be just shot of being one measure from the top of the pole to the cleat and back plus about another 1/4 meter for securing up the halyard.

The cleat is square lashed on at about elbow height of the Colour Bearer. The halyards are 'figure of 8' tied off at the cleat.
Encouraged to be written by Clear Vision
Posted by Tried_and_true at 10:02 AM

Subscribe to Come on we're going camping by Email 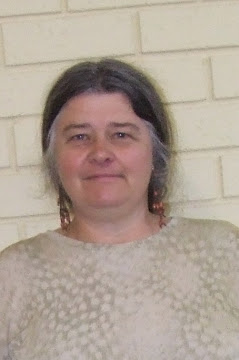